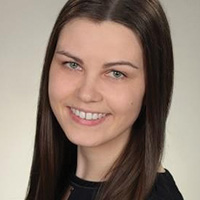 Title: The higher NDUFS8 protein serum concentration is associated with higher insulin sensitivity among people with T1DM and might reflects better mitochondrial turnover

Justyna Floty?ska is a PhD student at the Medical University of Pozna?. She is a doctor at the Department of Internal Medicine and Diabetology. She has many publications. She is a member of Diabetes Poland. Currently, she is implementing a research grant and deals with physical exercise among patients with type 1 diabetes