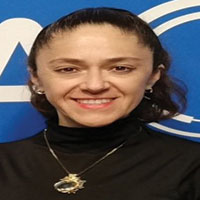 Title: Transcranial stimulation by direct current for treatment of obesity

Eva María Perusquía Frías is a physician graduated with honors from La Salle University in México City. She has a specialty in Internal Medicine from Hospital Español de México in México city with private clinical and hospital practice for 22 years. Also, she has a master’s degree in Humanitarian Sciences from Universidad Anáhuac Querétaro. For 12 years, she has been a mid-time professor in the Medicine Faculty of the Universidad Autónoma de Querétaro in the physiology and nephrology courses. Former president of the Internal Medicine College of Querétaro from 2014 to 2017 and current treasurer. Fellow of the American College of Physicians and Meetings Committee member of the American College of Physicians chapter México. Medical Advisor for the Neurosciences Unit in México city. Physician researcher in Clínica de Salud del Valle de Salinas, California, and currently Internal Medicine provider as part of the Pilot Mexican AB 1045 project. National and International lecturer in more than 65 seminars and meetings.  Member of the Internal Medicine College México and Sociedad Latinoamericana de Medicina Interna (SOLAMI).